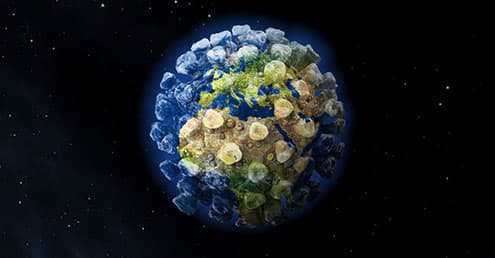 In the latest of their series of updates on the world’s response to the COVID-19 pandemic, BIR Ambassadors have provided a summary of the impact of the virus on their respective countries and regions, and on the recycling sector in particular.

The pandemic is now well controlled in both mainland China and Taiwan; however, some new cases have emerged lately, mostly involving travellers from other countries, while a very small proportion (perhaps 2%) of recovered patients have tested positive again for the virus.

Most manufacturers in mainland China are operating but no statistics are available to show production rates. Raw material was in short supply for a very small window, and then the window quickly closed again. Taiwan is following broadly the same pattern as mainland China.

According to Xinhua News, the People’s Bank of China – the central bank of mainland China – has released a US$ 1 trillion fund in a bid to repair the damaged economy, of which 80% is going to businesses and industries. The question, however, is from where will the demand come when other countries are still under lockdown.

The shipping demurrage and detention waiver announced by India’s Ministry of Shipping reflects the government’s great efforts to support the import/export sector as key to the survival of industries and businesses. Meanwhile, a lockdown has been declared across India, with city red zones within which no movement is allowed.

Conditions are severe, with industry-wide closures and no physical movement of anything other than essential goods. Commuting is restricted solely to those engaged in essential roles.

Infections have yet to reach their peak in India but already the country is suffering the combined effects of depressed sentiment and historic negative oil prices.

Singapore’s government has just announced an extension of the lockdown beyond the existing date of May 4 until June 1; at the same time, additional measures are being enforced between now and May 4.

With very aggressive testing even for people with no symptoms, most new cases have been in foreign workers’ dormitories. One of the key effects of this is that factories and scrap yards will be reduced to minimal activity levels because the majority of their workforce from Malaysia would not be able to come to work.

Singapore has also quarantined 180,000 foreign workers – a move which must surely impact the generation, collection and processing of scrap. Another big issue is logistics and finding shipping slots.

In the USA, each state has its own mandate for opening or remaining closed; it would be reasonable to think that decisions will be based on what is the best protocol for the population and on the circumstances for a particular state rather than on public opinion. That remains to be seen.

The US scrap industry is essential and functioning. The industry can do no more than adapt to the situation regionally: the West and East coasts are far more sensitive and reactive to the international situation and the transboundary movement of scrap from producers and consumers; the middle of the country, meanwhile, is focused more on the domestic producers of scrap and on domestic consumers. Most of the country will be reassessing the situation on May 1.

In Europe, Germany has taken the first tentative step back to normality by opening small shops of up to 800 square metres. Schools have reopened for those sitting exams but strict distancing rules are being applied. People are worried about the financial damage from this lockdown and are asking who should pay the unbelievably huge bill.

Industrial production seems to be restarting in Germany; the major automotive companies are producing passenger cars at a reduced capacity and the market is expecting shortly the introduction of incentives – like those seen during the 2008/09 financial crisis – to boost car sales.

Scrap availability throughout the European continent fell significantly but has begun improving week by week. Oil prices are not helping to restore confidence; instead, people are nervous about further volatility within the raw material markets. Aluminium has been hit by lower demand from the automotive sector and by the fact that 5.48 million tonnes were produced in March, mainly in China, for what the International Aluminium Institute identifies as an increase of 1.5% compared to 2019.

France has been in lockdown since March 16 but a gradual relaxation of restrictions is scheduled for May 11, always with the absolute priority of protecting public health. The recycling industry has been declared essential but, for metals, the long supply chain is badly disrupted and those scrap yards still open are handling only around 20% of their usual volumes. Despite the weak demand for metals in France, the rest of Europe and internationally, it is still much greater than the supply of secondary products.

More than 18,000 people have died from the Coronavirus in the UK and the lockdown has been extended until at least May 7. With waste classed as an essential industry and recycling still considered a waste activity, recycling companies are allowed to continue to trade. The British Metals Recycling Association has issued an advisory for members to show to council workers and police officers should they or their employees be stopped.

Government departments are supporting the position that anyone involved in the collection, processing, recycling and disposal of waste, including scrap metal, is allowed, if not encouraged, to continue operating. Indeed, the Secretary of State at the Department for Business, Energy and Industrial Strategy, Alok Sharma, has sent a letter thanking waste industry businesses for their work in keeping the UK economy going.

UK government support measures for businesses during the pandemic include: offering to pay 80% of furloughed workers’ wages (up to £2500 per month per employee) and to cover the cost of statutory sick pay; deferring the next quarter of firms’ VAT payments until the end of June and tax self-assessment payments due in July 2020 until January 31 2021; £20 billion in tax relief and cash grants to help businesses with cash flow; a business interruption loan scheme to make it easier to access financial support, and a self-employment income support scheme with a taxable grant worth 80% of trading profits up to a maximum of £2500 a month.

In a regulatory position statement expiring on June 30, the UK Environment Agency has set out a series of conditions that operators must follow so they do not have to sign or hand over paper copies of waste transfer and consignment notes in person.

Meanwhile, the government has published bespoke guidance on social distancing for companies in the waste management sectors. At sites where staff cannot be more than two metres apart at all times, companies are to advise them to wash their hands for at least 20 seconds more frequently than usual. Staff should also wash their hands each time before getting into enclosed machinery (such as forklift trucks or crane grabbers), and wash their hands for 20 seconds or more – or use hand-sanitiser when they cannot wash their hands – every time they get out. To help with this, companies are asked to consider providing additional pop-up handwashing stations or facilities, providing soap, water and hand-sanitiser.

According to the guidance, staff on sorting and picking lines should use standard cleaning products to undertake frequent cleaning and disinfecting of regularly-touched objects and surfaces, particularly at the end and beginning of shifts. Where staff share an enclosed space and are unable to maintain a two-metre distance, they should wash their hands for 20 seconds or longer before getting into, or after getting out of, the vehicle, or use hand-sanitiser where hand-washing is not possible. Where there must be more than one person in a vehicle, windows should be kept open for ventilation and workers should avoid touching their face at all times.

In North Africa, Ramadan begins on April 23 and is a period of consumption but not of production. This year, the recycling industries of Algeria, Morocco and Tunisia will be impacted by the usual drop-off in scrap but also by the measures implemented to protect their many workers from the virus.

South of the Sahara, the impact of Ramadan on Senegal, Mali and Chad will be less significant than in North Africa. Despite the virus, life does not stop and the main issue affecting recyclers is the drop in prices and the absence of international buyers, mainly from India.

Turning to the Middle East, the situation is quite similar across the GCC countries. Yards are open for those who can afford to finance day-to-day activities but scrap inflows are down to 30% of the norm because overall sentiment is low as it is not profitable to run with a full workforce when volumes are so reduced; low LME prices have depressed normal scrap collection activity; and circulation of finance by banks has become so restricted unless transactions are on online, which is not normal practice in the scrap industry where payments by cash or cheque are customary.

Lockdowns in major cities have been extended in some instances until further notice and commuting permits must be obtained in advance from the Road & Transport Authority, otherwise legal notices will be issued.

Imports into and exports out of the Middle East have not stopped but shipments to India – the main market next to China – are not feasible owing to severe congestion at Indian ports and uncertainty over how long demurrage and detention costs will be waived.

Exports to India have virtually stopped while shipments to China remain cautiously ongoing.

The copper and aluminium industries continue to operate within the scope of their long-term commitments to their customers, but cathode and scrap inflows have declined sharply.

Countries like Jordan, for example, are under lockdown and are imposing very strict licence-based controls on commuting which are bringing industry to a halt. Even government offices are closed while online activity is not facilitated across the various countries owing to poor infrastructure.

Overall sentiment in the Middle East is depressed and activities have been subdued following the oil price crash to historic below-zero levels. This is creating havoc in the financial markets and will put tremendous pressure on government budgets, which in turn will affect infrastructure and real-estate development – the main source of scrap metal supply.

Governments’ main focus is on protecting public health and safety by stopping the spread of the pandemic and taking care of existing casualties. Ramadan will provide some respite and no significant changes are foreseen over the next month.

A lockdown has been officially declared in Lebanon until the end of April and the official status will be reviewed in the coming days; in all likelihood, the lockdown will be further extended in major cities. Scrap yards are closed; as elsewhere in this region of the world, scrap is not considered to be among the essential industries. Furthermore, ports are open only for essential goods. Business activities traditionally slow down during Ramadan and so, even if the lockdown were to be lifted, activity levels in the recycling sector will start to improve only around the end of May.

In Bahrain, where seven people have died from COVID-19 at the time of writing, the government is exercising greater control by partially locking down particularly crowded places. Scrap yards are generally closed as they fall into the category of non-essential businesses; many companies, both local and international, are closed and some people are working from home, including government officers. Electricity, water and other government charges levied on public and private companies have been waived for three months.